Undated, but believed c 1830. Engravings ‘under the direction of C Frommel’ depicting views of Ancient Greece, each preceded by a page with few relevant paragraphs of text, in German and French. The engravings appear to be engraved copies from various earlier publications, with in some cases contemporary additions (human figures). Subjects include Thebes, Parnassos, the Temple of Olympian Zeus at Athens, and the Temple of Apollo Epicurios (near modern Andhritsena). While the book is quarto in format, with each page 315 mm by 241 mm, the engravings themselves (I think india-proof, tipped in) are only 148 by 108 mm, including a generous margin. An item of social history rather than archaeological or topographical record. While not telling us what Greece in the 1830s was like, they do give us some idea of what 1830s man thought Greece ought to look like. Mottled paper-covered boards, paper spine strip, engraved title page, 30 text-plate pairs of pages. Condition: Externally tatty, with paper wearing away from boards and spine strip crumbling. Internally, text block pulling away from casing, sporadic foxing, some of it severe, mostly but not exclusively to text pages. 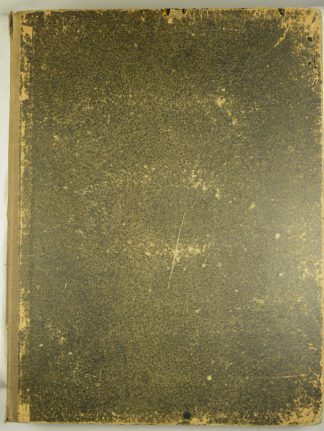