With a Prefatory Note by Major-General E B Ashmore, CB, CMG, MVO. The author flew as a pilot in a Scout Patrol over enemy lines during the Battle of the Somme and recorded details of the enemy aircraft he spotted in drawings, from memory; these were subsequently used as ‘type’ images for the British Forces. This book contains reproductions of drawings of aircraft in flight, both friendly and enemy, as seen by the author, with a paragraph of descriptive text opposite each. The book is intended “to give an idea of the work of the Royal Flying Corps for exactly a year, July, 1916, to June, 1917”. Rigid card covers, linen spine strip, grey paper covers to boards, titles to front board, 18 colour illustrations and text page facing. Limited edition of 1000 copies, printed on art paper, quarto (landscape format). Condition: Covers somewhat scuffed and bumped, internally clean and bright. 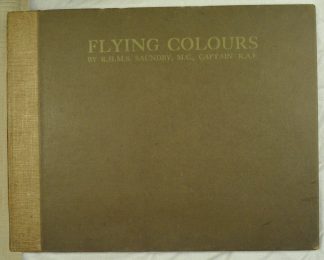