Handy Atlas of the Counties of England

Described as “Including maps of the County of London, North and South Wales, Channel Islands, the Isle of Man, and plans on an enlarged scale of the environs of six important towns. New and enlarged edition, shewing every railway station in England and Wales. Consulting index.” Undated. Red cloth-covered boards, gilt titles to spine and front board, gilt decoration to front board. Pages 1 to 4 give lists of parliamentary boroughs of England and Wales and also of County divisions according to the Redistribution Bill of 1885. There are 45 maps and a 58 page index. Condition: Spine faded, front board stained and rubbed, boards overall solid but rubbed. Foxing to endpapers and to the first few text pages. Some foxing to verso of maps, but the maps themselves are in excellent condition. 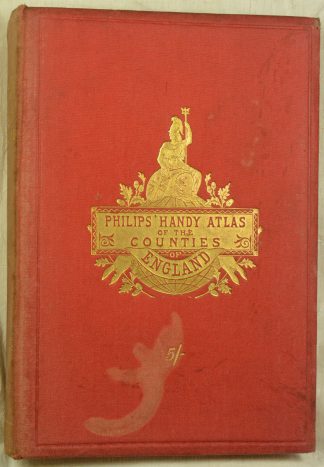 You're viewing: Handy Atlas of the Counties of England £70.00
Add to basket
Duck Cottage Books