Hydraulics of Great Rivers, the Parana, the Uruguay and the la Plata Estuary

With charts and tables, all as called for. In original black cloth-covered boards, blind stamped, gilt titles. An account of the surveying of three of the largest rivers in the world, undertaken under considerable pressure of time, to enable proposed engineering works. The work included development of an improved current meter, based on one that was just being offered to market as the expedition was being planned. Of the device offered to him, which had been simplified from a sound design in order to make it “easier” to use, the author wrote “all these attempts at making things very easy is a mistake, for they tend to make things very useless” – a sentiment which is likely to ring true for many of us today. Condition: Boards bumped and rubbed, title page just starting to pull away from its binding, and some foxing to the prelims. Apart from the early foxing, the pages are clean and bright. The volume has been owned by K u k Plonnier-Cadettenschule zu Hainburg, and has their ownership stamp to the title page and occasionally to text pages. The charts and tables are clean, bright and sound, although the chart of the Delta of the Parana has separated into two sheets along the centrefold. 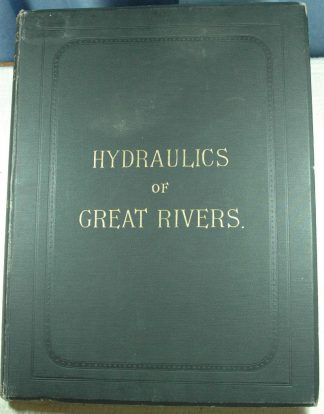 You're viewing: Hydraulics of Great Rivers, the Parana, the Uruguay and the la Plata Estuary £150.00
Add to basket
Duck Cottage Books