The Seven Curses of London

James Greenwood’s pen-name was the “Amateur Casual”. The seven curses he writes of were: Neglected Children, Professional Thieves, Professional Beggars, Fallen Women, The Curse of Drunkenness, Betting Gamblers, and Waste of Charity. Undated, but clearly second half of 19th century. Portrait of author as frontispiece. Original bevelled, brown cloth-covered boards. Pagination viii, 461, [1], the last, unnumbered page being publisher’s advertisements, in which an ‘Important Book on London Asylums’ etc is described as being in preparation. Physical details thus suggest 1869 publication, ie first edition. Condition: Spine strip is detached and much is missing. The hinges are strained across the front free end paper and paste down. However the text block is sound. There are pencil notes to the front free end paper, the previous owner’s pencil signature to the title page and short pencil notes in the margins. 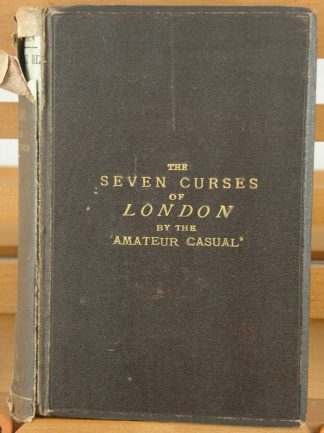 You're viewing: The Seven Curses of London £55.00
Add to basket
Duck Cottage Books