Produced by the then (British Government) Ministry of Fuel and Power; this copy has their library stamp, and a subsequent stamp of H M Inspector of Factories, Woolwich Dis., 1-Jul 1936.. Stapled booklet, red-brown paper covers, 18 pages. With a Bibliography. A review of the initiation and development of testing to establish the safety of electrical apparatus described as ‘flameproof’- but also described as “of interest to many engaged in other industries in which there is an explosion hazard'”. With photographs of Buxton Testing Station and some testing apparatus. Condition: Rather scruffy externally, with label remnants and various ownership notes and stamps. Internally, clean and complete, although again with ownership stamps. 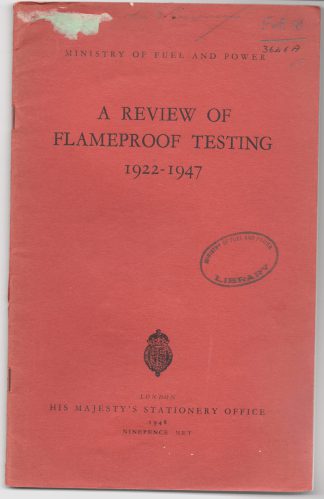 You're viewing: A Review of Flameproof Testing 1922-1947 An Account of Developments During Twenty-five years of Authoritative Work in Great Britain £20.00
Add to basket
Duck Cottage Books